CIRSE standards of practice on gynaecological and obstetric haemorrhage

Genital bleeding is a major cause of morbidity and mortality in women, particularly during childbearing years. Severe postpartum haemorrhage (PPH) plays a prominent role as a cause of maternal death and accounts for 25% of maternal deaths worldwide. In developed countries, it is estimated that there are 9–17 maternal deaths related to PPH per every 100,000 deliveries, as compared to 400 deaths per 100,000 deliveries worldwide (World Health Organization, UNICEF, World Bank, and United Nations Population Fund 2007; Khan et al. 2006). PPH is divided into primary haemorrhage, which indicates excessive bleeding from the genital tract of > 500 ml in the first 24 h after a vaginal delivery, and secondary haemorrhage, which occurs after the first 24 h up to 6 weeks after the birth (Lopera et al. 2013; Briley et al. 2014; Gonsalves and Belli 2010). The most common causes of primary PPH include uterine atony, when the normal myometrium fails to contract after delivery of the placenta, genital tractinjuries such as perineal or vaginal lacerations, uterine rupture or inversion, placental implantation abnormalities, pseudo-aneurysms and congenital or acquired coagulation disorders (Gonsalves and Belli 2010). Secondary PPH is mainly related to retained products of gestation or infection. Other conditions resulting in significant urogenital haemorrhage include gynaecological cancers, post-operative bleeding, trauma, arteriovenous malformations (AVMs), such as congenital and acquired AVMs and arteriovenous (AV) fistulas (Soyer et al. 2015; Mihmanli et al. 2001; O’Brien et al. 2006; Katz et al. 2012; Josephs 2008; Field et al. 2016). Initial management of PPH with fluid resuscitation, correction of any coagulopathy, removal of retained placental tissue, uterotonic drugs and balloon tamponade will stop bleeding in 85% of patients. Where these measures fail, for many years, internal iliac artery ligation has been used as a potentially effective means of controlling pelvic haemorrhage (Burchell 1968; Chattopadhyay et al. 1990; Evans and McShane 1985; Katz et al. 2012). The effectiveness of internal iliac artery ligation results from reduced pelvic blood flow and subsequent haemostasis. However, this may be successful in < 50% of the cases, potentially leading to a high rate of hysterectomy up to 50% (Clark et al. 1985, B-Lynch et al. 2012). In 1969, Nusbaum demonstrated that arterial bleeding might be controlled by selectively infusing a vasoconstrictorinto the affected artery (Nusbaum et al. 1969). His technique started the evolution of transcatheter selective obstetric haemorrhage embolisation (OHE) in otherwise untreatable bleeding. Athanasoulis et al. reported in 1976 the first series of gynaecological bleeding to be treated with embolisation (Athanasoulis et al. 1976). Subsequently, Brown and Heaston used this technique to treat PPH in 1979 (Brown et al. 1979; Heaston et al. 1979). From this time, with the evolution of endovascular techniques, OHE has emerged as a highly effective percutaneous technique for controlling gynaecologic and obstetric haemorrhage. Uterine rupture and eversion may cause severe blood loss. Although its treatment is managed primarily by surgery, there are endovascular options stated (Hofmeyr et al. 2005; Lopera et al. 2013; Gonsalves and Belli 2010). Table 1 provides a summary of key recommendations for gynaecological and obstetric haemorrhage.

Any amount of bleeding, that, if not replaced, could cause shock or death in the mother

Indicates excessive bleeding from the genital tract of 500 ml or more within the first 24 h after a vaginal delivery (Briley et al. 2014).

Defined as stopping the haemorrhage, regardless of number of OHE procedures, with no subsequent surgical procedure due to persistent bleeding.

The internal iliac artery (IIA) divides into a posterior and an anterior division, the latter giving rise to several parietal and visceral branches (Fig. 1). The visceral branches are the key vessels for OHEand include uterine, vaginal, and internal pudendal arteries. Parietal branches of the anterior division of the IIA include obturator and inferior gluteal arteries. Moreover, various anastomoses exist between the IIA, mesenteric arteries and external iliac artery branches as well as anastomoses between the anterior and posterior division arteries (Ouyang et al. 2012; Matson et al. 2000). The uterine artery (UA) is most relevant to OHE in the setting of obstetric and gynaecological haemorrhage. Depending on its level of origin, the UA is classified in to one of four types (Fig. 2a-d). The course of the uterine artery typically includes a hairpin curve where the artery passes through the cardinal ligament at the base of the broad ligament (Albulescu et al. 2014; FarrerBrown et al. 1970; Razavi et al. 2002). Further key arteries are vaginal arteries stemming from the anterior division of the IIA below the origin of the UA or from the UA itself. Cervicovaginal branches originating from the uterine arteries may also supply the cervix. Branches from the inferior vesical artery supply the middle portion of the vagina. The internal pudendal artery supplies the lower cervical portion, whereas the posterior portion is generally supplied by the middle rectal artery. There is a continuous arcade on the lateral borders of the vagina, uterus and adnexa. The cervicovaginal arteries arise from the uterine artery (Palacios Jaraquemada et al. 2007). Anastomoses between the uterine and the ovarian arteries are commonly present (Figs. 3 and 4 ) (Razavi et al. 2002). Important anatomical variations also need to be considered, e.g. a persistent sciatic artery (Brantley et al. 1993), originating from the anterior IIA division and a “corona mortis”, Latin for “crown of death”, a common variant vascular anastomosis between the external iliac artery or deep inferior epigastric artery with the obturator artery present in a third of patients (Smith et al. 2009). AVMs and AV fistulas in particular are more likely to have variations in arterial blood supply. They most frequently arise from internal pudendal arteries, cervical branches of the uterine artery, or from vaginal arteries after vaginal birth and from uterine arteries after caesarean section (O’Brien et al. 2006).

The writing group, which was established by the CIRSE Standards of Practice Committee, consisted of 4 clinicians with internationally recognised expertise in gynaecological and obstetric haemorrhage. The writing group reviewed existing literature on gynaecological and obstetric haemorrhage and OHE, performing a pragmatic evidence search using PubMed to search for relevant publications in the English language.

Pre-treatment imaging If conservative treatment options are exhausted, uterine artery embolisation (UAE) should be performed if the woman is haemodynamically stable enough to be moved and there is an embolisation service locally available. OHE does not require general anaesthesia, but close monitoring and support to maintain blood pressure requires the presence of an anaesthetic team. Following a right-sided unifemoral approach using a 4-5Fsheath, a selective internal iliac digital subtraction angiography is performed to determine anatomy and to locate possible extravasation of contrast agent. A contralateral internal iliac angiography can be performed initially, and then a selective examination of the uterine artery can be subsequently attempted in almost all cases. The ipsilateral internal iliac artery and uterine artery can also be catheterised with the same catheter via the same puncture site. Oblique views and distal superselective injections for other anastomotic vessels, such as the vaginal branches, may be required to identify the arterial bleeding site. In a slower intermittent bleed ultrasound, CT and MR may be helpful prior to proceeding to catheter angiography (Sierra et al. 2012; Lee et al. 2010; Cano Alonso et al. 2009; Vasanawala et al. 2006). 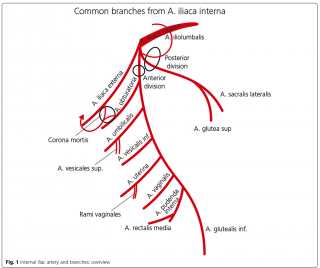 Transabdominal and/or transvaginal ultrasound may be performed at the bedside. Ultrasound may show abdom- inal fluid and retained products. Doppler studies may also help assess any AVMs or AV fistulas (O’Brien et al. 2006), however, they play a minor role in acute haemorrhage.

If relevant for the interventional procedure, Triple-phase CT protocols are recommended, with an unenhanced scan followed by arterial phase (30 s) and a delayed por- tal venous phase (60–70 s). Comparing the unenhanced scan with the contrast-enhanced scan will demonstrate any pre-existing hyperattenuation to help differentiate areas of calcifications, hematoma, or postoperative ma- terial from extravasation during the contrast-enhanced phase. However, if diagnosis and management is clear,

patients may also directly proceed to angio and intervention.

The delayed portal venous phase imaging helps to dif- ferentiate arterial haemorrhage from engorged vessels, venous bleeding or pseudoaneurysms. Low-dose CT pro- tocols, which do not compromise diagnostic certainty, should be utilised where possible to reduce the potential radiation dose from a triple-phase study. 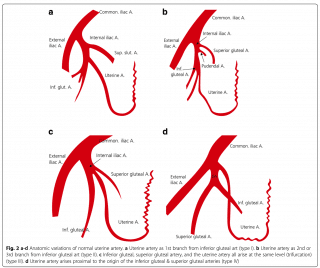 MR-Angiography (MR-A) may give similar information to CT and can be extremely useful in diagnosing abnor- mal placentation during gestation (Wang et al. 2017). However, MR-A is uncommonly used in an acute setting.

For genital bleeding following vaginal or caesarean deliv- ery, or due to surgical complications including post hys- terectomy (Cheng et al. 2017; Lee et al. 2012a; Fu et al. 2018), OHE should be considered, particularly if bleeding is due to spontaneous pseudoaneurysm rupture (Fig. 5) (Gonsalves and Belli 2010).

Placenta previa, placenta accreta, placenta percreta and vasa previa are important causes of bleeding in the sec- ond half of pregnancy and in labour (Oyelese and Smu- lian 2006). 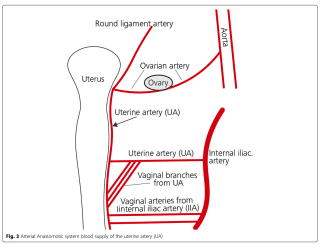 Abnormal placental implantation is caused by inva- sion of the chorionic villi through the decidual basal layer into the myometrium (Kaufman and Tadros 2018). Placenta accreta occurs when the chorionic villi attach to the uterine myometrium only, and pla- centa increta refers to partial invasion of the chori- onic villi into the muscle of the myometrium. Placenta percreta is the most severe form, and occurs when there is a chorionic invasion throughout the myometrium into the serosa (Fig. 6). There is a strong association with caesarean section and the in- cidence is increasing worldwide (Granfors M et al. 2020). Endovascular interventions have been applied in the form of prophylactic balloon catheter occlu- sions and /or uterine embolisation and are used for patients undergoing planned hysterectomy, as well as for those who wish to have conservative management with uterine sparing techniques (Ojala et al. 2005).

In cases of tumour invasion of larger arteries such as the external iliac artery, this may also result in major retroperitoneal haemorrhage, and OHE has become the first line treatment (Katz et al. 2012; Pisco et al. 1989).

Pseudoaneurysms may be seen with or without PPH. Uterine AVMs and AV fistulas may be congenital or ac- quired and, if acquired, usually post-instrumentation or

You can find out more about which cookies we are using or switch them off in settings.

This website tuttointerventistica.it uses cookies so that we can provide you with the best user experience possible. Cookie information is stored in your browser and performs functions such as recognising you when you return to our website and helping our team to understand which sections of the website you find most interesting and useful.

Strictly Necessary Cookie should be enabled at all times so that we can save your preferences for cookie settings.

If you disable this cookie, we will not be able to save your preferences. This means that every time you visit this website you will need to enable or disable cookies again.